Added 2 weeks ago by vindheim
3 Views
Please support to grow the channel by subscribing: https://tinyurl.com/wg26b5e

A Boeing 737-800 operated by Turkish Airlines was on its scheduled passenger flight to Amsterdam, Netherlands.

When the aircraft was climbing through 400ft, the left radio altimeter system provided erroneous readings.

The remaining part of the flight was uneventful.

At 10:04, the plane entered Dutch airs the east while descending. The Area controller informed the crew to expect ILS runway 18R for landing.

The captain contacted Schiphol Approach and informed them they were descending to FL70 at a speed of 250 knots. ATC instructed the crew to descend FL40 for an ILS approach to runway 18R.

There was an audio warning regarding the landing gear

At 10:17, the aircraft warned the crew again about the radio altimeter.

During the warnings, a radio altimeter was showing the height of -8 feet on the primary flight display of the captain.

Until now, the right AP and the AT had been activated. The crew tried to engage the second AP for a dual-channel approach. Because of this, the right AP disconnected and the left AP did not engage. Then again the right AP was engaged.

A speed of 160 knots was selected with the flaps to 15. The speed was higher than normal at that moment but it was decreasing.

The aircraft was above the glide path. So they need to intercept the glideslope from above. The ICAO rules do not allow to do so but according to Dutch rules, it can be done if the controller agrees.

The aircraft intercepted the localizer signal and started to follow the signal automatically.

The crew selected the ‘vertical speed’ mode and set the descent rate of 1,400 feet per minute to intercept the glide path from above. Then the flight mode annunciation of the AT changed to ‘RETARD’ on both primary flight displays. The thrust levers went to the idle position. Normally when the aircraft descends below 27 feet, the autothrottle enters retard flare mode. But in this flight, the indicated altitude was below 27 feet, that's why the retard flare mode activated instantly after the pilots switched the AP to V/S mode.

The captain contacted Schiphol Tower, at that time the safety pilot remarked that they had a radio altimeter failure which was confirmed by the captain.

The aircraft intercepted the glide path at a height of 1300 feet. The flight director pitch bar of the primary flight display of the captain disappeared. The speed decreased to 158 knots and then increased to 169 knots and started to decrease again.

Then the crew got clearance to land on runway 18R, which was confirmed by the captain.

When the plane was descending through 800 ft the speed of 144 knots was selected by the crew.

The captain listed the items of the landing checklist that the first officer had to answer to show that they had been executed properly. At the same time, the horizontal tailplane of the aircraft was trimmed by the autopilot. The safety pilot reported that the cabin was ready for landing.

The aircraft was flying just below 500 feet with a speed of 110 knots. The throttle levers were at the idle position and the angle of attack was increasing.

The stick shaker was activated. Then the safety pilot warned about the low speed. Immediately the thrust levers were moved forward by slightly more than halfway then again it was pulled back immediately because the AT was still active.

The speed was 107 knots and the position of the nose was more than eleven degrees above the horizon.

The crew deactivated the AT, the autopilot was disconnected and the control column was pushed forward. The stick shaker stopped and was again activated. The pitch attitude decreased to eight degrees below the horizon.

Various ground proximity warning system warnings were also generated. A ‘sink rate’ warning was generated at the warning to pull up.

The aircraft crashed at a distance of  1.5 kilometers from the threshold of runway 18R.

It resulted in the deaths of nine passengers and crew, including all three pilots.

* Copyright Disclaimer Under Section 107 of the Copyright Act 1976, allowance is made for "fair use" for purposes such as criticism, commenting, news reporting, teaching, scholarship, and research.

- This video has no negative impact on the original works
- This video is also for research and commenting purposes.
- It is not transformative.

If you have any issues with our "Fair Use", please contact us directly, for amicable and immediate attention. 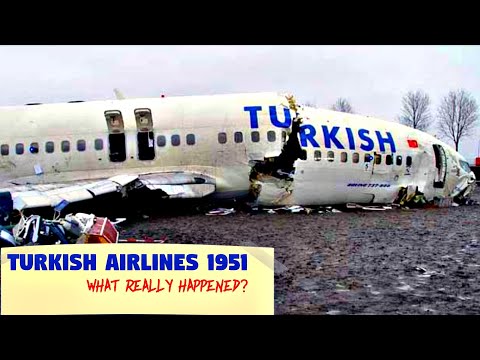 Please support to grow the channel by subscribing: https://tinyurl.com/wg26b5e A Boeing 737-800 operated by Turkish Airlines was on its scheduled pass...