Added 8 months ago by vindheim
53 Views
The adventure begins in Tromsø, the “Paris of the North.” Here you can experience an area rich with Norse and Sámi history, after which you’ll embark on your whale-watching voyage in the early evening.

We’ll follow two potential courses for this voyage: one heads south around the island of Senja (mainly used from mid-January to March), while the other moves north to the Kvaenangen fjord (visited in November to mid-January).

Both routes depend on weather conditions, the amount of daylight during the voyage, and the expected location of the whales.

Assuming you make the first voyage, you’ll typically start by sailing clockwise or counter-clockwise around the island of Senja. You’ll spend several days along the north coasts of this island as well as Andfjorden, where we’ve had success spotting whales. We’ll keep a sharp lookout for sperm whales and other species here.

Near the island of Andenes, located along the edge of the continental shelf, whales dive especially deep to feed on giant squid. You may also see white-tailed eagles hunting herring in this area. These are some of the largest birds of prey in Europe.

We’ll port for the night in one of the many scenic fishing villages nearby, such as Skrolsvik, Andenes, Gryllefjorden, Hamn, or Sommarøy. After sunset, we’ll make short hikes along the coast or in the villages, all the while keeping our eyes open for the enchanting glow of the auroras.

We’ll then continue our circumnavigation of Senja, followed by a voyage to the small island of Sommarøy. Here there are good opportunities to see the northern lights, embark on pleasant hikes, and take in the island’s small bays and white beaches.

On the seventh day of the expedition, we’ll sail back to Tromsø with time enough for you to shop for souvenirs, visit a museum, or take a walk in the fresh winter air. We’ll disembark the next day, taking home a wealth of memories and pictures.

A few things to keep in mind about these voyages:

Because of the seasonal occurrence of herring and whales in Northern Norway’s fjords, the whale safari cruises take place in winter, when the Northern Norway days are short and the nights long.

Whale watching (orcas and humpbacks) is highly dependent on the variable herring stocks in the area, and this is ultimately unpredictable. Other whales (i.e., sperm whales) are not dependent on herring, which is why we have a good chance of seeing them in specific areas, such as along the south route near Andenes.

Additional note: The coasts and fjords of Norway are renowned for their beauty.
In the far north of the country, about 350 km (217 miles) north of the Arctic Circle, lie the islands of Kvaløya and Senja. Enormous schools of herring gather in the fjords around these islands to live out the winter.

This abundance of food creates one of the largest concentrations of biomass on Earth, which in turn attracts large numbers of whales. It is these giants of the sea that this voyage is dedicated to finding.

During winter the daylight is limited, but the nighttime hours are far from wasted: North Norway is one of the best areas in the world to see the northern lights, a magical phenomenon that can only be fully appreciated when the sky is clear and dark, with minimal light pollution.

This voyage offers ample opportunities to admire the auroras from the remote bays and fishing villages where you’ll spend the night. 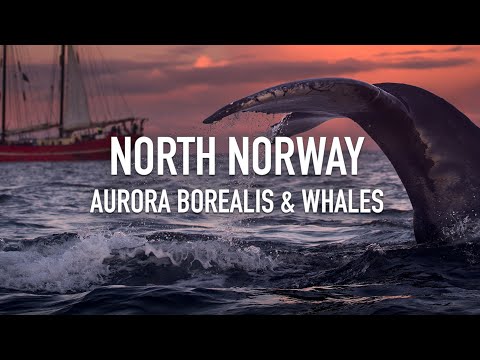 The adventure begins in Tromsø, the “Paris of the North.” Here you can experience an area rich with Norse and Sámi history, after which you’ll embark ...