Added 2 years ago by vindheim
179 Views
If you are afraid of heights you may want to give this nail-biting viewing platform coming to Norway a miss. Construction for a futuristic podium called Viewpoint Gaularfjell is underway, which will feature a three-spiked structure that stretches out over the mountainous terrain. Visitors will be able to climb steep slab-like staircases, two of which are suspended over vast drops. Located near the country's west coast, the unusual structure aims to showcase the scenic surroundings without being too obtrusive. The structure is a triangular concrete surface, with corners pointing towards north, south and west. Norwegian architecture firm Code have released images and a timelapse video of the unusual Viewpoint Gaularfjell being built. Perched 2,300 feet above sea level, the precarious location is said to have made transporting materials, and developing the spikes, a challenge. Workers are said to be making the final phase touches to the simple structure, which is scheduled to open in summer this year. When it opens, visitors to Norway's National Tourist Route Gaularfjellet will be able to experience the scenic stopover during their road trips. The viewpoint follows the construction of a similarly terrifying structure which opened in China last year. The horseshoe-shaped glass walkway in Chongqing extends 87.5ft from the edge of a cliff, allowing visitors to feel as though they are walking on air with the valley floor 2,350ft below their feet. Located in the Longgang National Geological Park in south-west China, the bridge has been named Yuanduan, meaning ‘at the end of the clouds’. It can accommodate up to 200 visitors at once, with each one paying an admission fee to spend 30 minutes on the see-through floor. 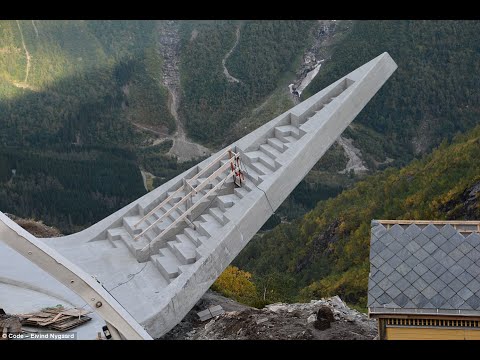 If you are afraid of heights you may want to give this nail-biting viewing platform coming to Norway a miss. Construction for a futuristic podium call...