The name is the plural form of hval, which means "whale". The form and shape of the islands resemble a pod of whales. Prior to 1889, the name was spelled Hvaløerne, meaning the whale isles.

South of Skjærhalden lies a chain of a few inhabitable islands and several hundreds of smaller islands and rocks. The bigger islands are named, clockwise, Nordre Sandøy, Søndre Sandøy, Hærføl, Søndre Lauer, and Nordre Lauer. Another smaller island is Tisler. On all of these islands, with the exception of Søndre Lauer, summer houses fill the landscape. The islands of Søndre Sandøy and Hærføl are the two only islands that have local shops and roads which support car traffic.

Nordre Sandøy, situated on the north end of this chain of islands in southern Hvaler, is one of the largest islands with a distinct flora and fauna diversity. Although equipped with a good stretch of roads, car traffic is forbidden there and no commercial activity whatsoever exists. In many ways, this gives its population (mostly summertime vacationers) a greater feeling of isolation from the average Norwegian's hectic life, and it acts as a buffer against pollution. Nordre Sandøy is thought to have been one of the bases of Peter Tordenskjold during his time as a privateer. One of the bays on the island is named "Tordenskjoldsbukta" (Norwegian: Bay of Tordenskjold). The remains of two dead pirates have been found on the island. Legend has it that he buried some of his treasure on the island. In 1997, a local boy, Simon Rene Magnussen, found three old golden coins while scuba diving in the area.

Thank you for watching! 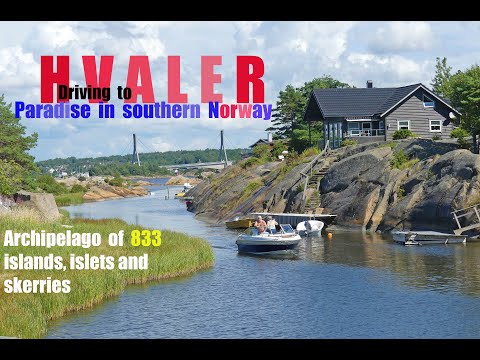 #hvaler #fredrikstad #skjærhalden #paradise Hvaler is a municipality that is a group of islands in the southern part of Viken County, Norway. The admi...